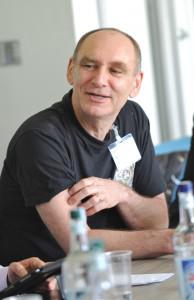 In this talk, Marconi Professor and Turing Fellow, Jon Crowcroft will present an idea based on a simple model for small-world-like graphs which are not characterised by a single parameter (for example, preferential attachment probability). Where other models for heterogeneity or time-variation may be too complex, Jon’s theory may just have the answer. Naïve? Perhaps, but whatever your thoughts, Jon is keen to hear them. This talk is aimed at students and researchers with an interest in graph theory, networks, and social media analytics.

Jon Crowcroft has been the Marconi Professor of Communications Systems in the Computer Laboratory since October 2001. He has worked in the area of internet support for multimedia communications for over 30 years. Three main topics of interest have been scalable multicast routing, practical approaches to traffic management, and the design of deployable end-to-end protocols. Current active research areas are Opportunistic Communications, Social Networks, and techniques and algorithms to scale infrastructure-free mobile systems. He leans towards a “build and learn” paradigm for research. He graduated in Physics from Trinity College, University of Cambridge in 1979, gained an MSc in Computing in 1981 and PhD in 1993, both from UCL. He is a Fellow the Royal Society, a Fellow of the ACM, a Fellow of the British Computer Society, a Fellow of the IET and the Royal Academy of Engineering and a Fellow of the IEEE. He enjoys teaching, and has published several books based on learning materials.