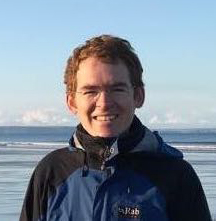 Joel had worked for the Institute as a Research Software Engineer on the Living with Machines project since December 2018. He worked closely with Alan Wilson (Director, Special Projects), and Alan has written this appreciation of Joel’s life and work.

I have known Joel since August 2006 when I joined the Centre for Advanced Spatial Analysis (CASA) at University College London (UCL).

At that time, Joel had been there for just a few months as a systems administrator following six years of work in industry after graduating with a BEng in Computing from Imperial College in 2000.

In 2008, Joel decided to develop his career through working for a PhD and I was delighted to be his supervisor and collaborator from October that year. I had some very difficult problems in urban modelling and it was a perfect match to connect these to Joel’s computing skills.

Most urban models were equilibrium models while real life, of course, is dynamic. What is more, urban dynamics’ modelling involves non-linearities and therefore the possibilities of phase changes and path dependence. There were ideas around how to build these kinds of models in principle, but they hadn’t been put to the test. Joel’s computing skills enabled us to make huge progress, modelling real systems with particular emphasis on visualisation of the results.

In his thesis, he worked through five examples: understanding the dynamics of retail systems, and particularly, phase changes – and indeed demonstrating that a new retail centre would have to have a minimum initial size for it to succeed – a finding that has not yet been put to the test! Joel’s approach to visualisation took me into new territory – for example using parallel coordinates. The first retail example was London, which has 200 retail centres, and therefore the dynamics involve a 200-dimensional state space. We shifted the research to South Yorkshire which has 19 retail centres – a feasible visualisation proposition for parallel coordinates. These methods were extended into modelling ‘historical’ dynamics – the evolution of Chicago and the North American urban system in the Nineteenth Century; showing that spatial interaction and agent-based modelling can be equivalent; applications of game theory in planning; and finally taking on the massive challenge of ‘whole city’ dynamics – one finding within this being the possibility of identifying areas about to be gentrified through a phase change.

Looking back, the richness of this thesis is extraordinary: progress was made with many research challenges, many of which remain ripe for further development. The research was published in a series of papers and culminated in a book – ‘Explorations in urban and regional dynamics’ published in 2015.

In 2012, Joel moved to a research post in Computer Science at Swansea and added depth to his work on dynamic urban modelling. Three years’ later, he moved to a post of Lecturer in the Geography Department at Swansea. I continued to work with him there and made the occasional trip to Swansea. Flora Roumpani, then a PhD student at CASA, joined the ‘team’ and the three of us worked on the dynamic urban model developed by Joel, shifting it towards real application through Flora’s visualisation and interactive planning skills.

In 2019, he decided that he wanted to return to full-time research and this coincided with the launch of the two Strategic Priorities Fund programmes at the Institute – AI for Science and Government (ASG) and Living with Machines (LWM). He joined Turing as a Research Associate in the Research Engineering Group and worked on the LWM Programme. Joel’s intention was to develop and apply a richer version of the ‘Chicago’ model to Nineteenth-Century Victorian cities. In losing Joel, we have currently lost that strand of work.

Joel was a computer scientist who became a serious urban modeller, taking on and progressing some major challenges. He had a very unusual combination of high-level computing skills and domain knowledge.

Joel is probably the best single research collaborator I have ever had.

Everyone will remember him as a gentle and warm person, always good to work with.

He is much missed.

Crooks, A., Hudson-Smith, A. and Dearden, J., 2009, Agent street: an environment for exploring agent-based models in Second Life, Journal of Artificial Societies and Social Simulation, 12(4)