However, it is claimed this time it is different. Advances in AI and automation mean that new technologies, such as robots, really are coming to take away jobs. From physical tasks such as delivery drones dropping off parcels to cognitive tasks such as providing customer service through ‘management bots’, the increasing capacity of algorithms to self-learn and problem solve means that routine and non-routine tasks are increasingly seen as vulnerable to AI-led automation. A think piece from the Centre for Work-Based Learning is bold about the consequence: ‘this revolution is not like those that happened in the past’.

The policy (and media) frenzy about the rise of the robots has penetrated the consciousness of the public. As the table below shows from the 2018 round of the British Social Attitudes Survey, 75% of respondents thought it was likely that in the next ten years ‘machines and computer programs will do many of the jobs currently done by humans’.[1]

And yet, as the table also shows, only 10 % of respondents were worried that their job might be replaced. The survey was not able to explore the reasons for this dissonance amongst the public. It could simply reflect an optimism based on the state of the current labour market: the UK currently has record number of people in work and an unemployment rate at its lowest level for 40 years. In which case, it could be that a time-lag for trouble exists, with replacement by clever robots not yet impacting workers but still imminent.

Even so, higher paid workers, who also tend to be higher skilled, are even more optimistic about their chances in the ‘robot wars’. In the same survey, only 6 % said that they are ‘very’ or ‘quite’ worried about being replaced in the next 10 years. More than double (15%) the number of low wage workers are worried. Higher paid workers’ optimism might reflect that their jobs tend to be more complex and so less easy to replace with AI-led automation. Their relative security is revealed by Rafa Muñoz-de-Bustillo and his colleagues’ analysis of the probability of computerisation against level of job quality (including pay and skill) in 39 industries using European data.[2] What the figure shows is that jobs of higher quality are less likely to be automated. 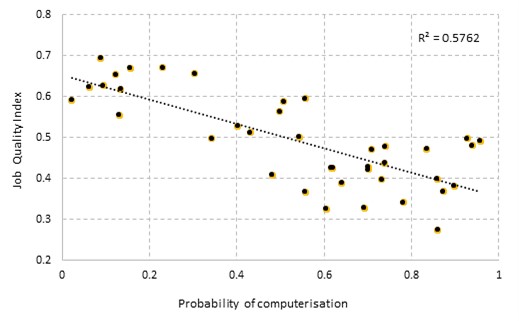 The general optimism of all workers might also reflect historical experience. The most pessimistic claims (see, for example, Jenkins and Sherman, 1979)[3] often assume that automating tasks means automating jobs, which leads to job destruction. Such claims can be simplistic. While automation of tasks on a large scale may mean that fewer human workers may be needed to carry out the same volume of work, there is some evidence to suggest that in many cases this may be taken as an opportunity to free up time for workers to carry out more complex tasks that are so far beyond the scope of machines and that more jobs result.

One example is ATMs. When banks introduced them to automatically dispense money to customers, the number of people working in banking rose rather than fell as an army of call centre workers were also created to deal with back office functions. Plus, bank tellers didn’t disappear, they turned into bank sellers, promoting and marketing products to customers.

Both developments occurred with the deregulation of the banking industry—which should alert us to another point—the future of work will not be determined solely by technology. Other developments such as an aging workforce, tighter labour markets and labour costs will also influence the introduction of AI-led automation, as will government regulation, trade unions and, of course, employers. What happens inside firms, particularly around the introduction and use of new technology is often the outcome of negotiation between employers and unions or contestation between employers and the courts, as the series of ongoing cases around the use by platform companies—such as Uber—of algorithmic management of putative self-employed workers illustrates.

Even when employers do have a mandate to introduce full automation, faith in its efficiency can be misplaced. Jon Clark’s too easily overlooked account of Pirelli’s attempt to establish a full ‘lights out’ factory in the UK—lights out because automated machinery doesn’t need light to do its work—offers a good example.[4] After clashes between engineers and accountants over unforeseen technical problems and the need to reduce costs, plans for an ‘all singing, all dancing factory’ were scaled back. Human intervention, it was realised, was still needed to ensure production runs smoothly, as Tesla’s recent production problems also illustrate.

There is more likely to be futures of work rather than a future of work. A robust understanding of these futures needs research. We need to be able to cut through the predications and the prescriptions with robust evidence.

At the moment this evidence is lacking. With no technology and work survey or any other useful related dataset, we don’t know the extent of the adoption of AI-led automation, why companies are introducing it or might introduce it, and how its implementation will affect work and which workers are likely to be affected and in what ways. Some of this evidence will emerge from conventional company- and industry-level case study-based research and survey methods. However, the availability of new sources of data, such as administrative records, together with data science-based analytics, provides an opportunity to transform both the quality and the timeliness of the labour market evidence base.

At this stage the key task is to identify the potential implications AI-led automation may have for jobs (destruction and creation by occupation and industry), work organisation (relationships amongst workers, and between workers and employers), work processes (reconfiguring tasks and responsibilities) and skills (for residual and new tasks). Whatever the outcome, the future is not written: choices can be made about how we will deploy these technologies, for what purposes and to what ends.

Chris Warhurst FRSA is Director of the Institute for Employment Research at the University of Warwick. He is an internationally recognised expert and a government adviser on skills and job quality.

Rob Procter is a Turing Fellow as well as Professor of Social Informatics and deputy head (research) in the department of Computer Science, Warwick University. Previously he has held positions at Manchester and Edinburgh universities.

Wil Hunt is a Research Fellow at Warwick Institute for Employment Research, University of Warwick. His research interests relate to labour market transitions, social inequality and changing employment practices and new and precarious forms of working.

This week the Turing is publishing a series of guest blogs exploring different angles of #futuresofwork as well as hosting a Data Debate: The AI will see you now, with the British Library the evening of Thursday 1 November. Read the Turing's new landscaping report: Data Science, artificial intelligence and the futures of work commissioned by our research programme in Economic Data Science. Later this autumn/winter we will also be announcing a portfolio of research projects on 'The Changing Nature of Work' as part of the Turing-HSBC-ONS Economic Data Science Awards.