In this post we describe the SHEEP project and platform by means of an example. SHEEP is a recursive acronym for “SHEEP is a Homomorphic Encryption Evaluation Platform,” and is under development by researchers at the Turing Institute.

Consider the following problem: I want to host a database remotely, but the data within it are sensitive and must be encrypted. In addition, I want clients who access the database not to reveal which records were accessed. This last requirement especially sounds impossible, short of transmitting the entire database. This is in fact a classical problem in cryptography known as Private Information Retrieval (PIR) and there are several ways to solve it. It turns out that we can construct a protocol for private information retrieval based on a technology known as Homomorphic Encryption.

Homomorphic Encryption (HE) allows us to compute on encrypted data without decrypting it. Let's give an example. You can encrypt the number 23 and obtain an encryption ? ? ?, and encrypt 19 and obtain an encryption ? ? ?. Homomorphic encrytion schemes then provide a way to add the two encrypted values to obtain a new encryption, say ? ? ? + ? ? ? = ? ? ?, that when decrypted equals 23 + 19 = 42. Crucially, whoever operated on the encrypted values (the fruit) did not have to be able to decrypt them or otherwise make sense of them in order to perform the addition correctly.

This enables secure outsourced computations, where Alice can encrypt her data as ? ? ? ? ? ? ?, upload to a private computing platform (let's call it BlindFruit™), and obtain the result of a computation again encrypted. This differs from existing cloud computing frameworks in that BlindFruit™ never learnt anything about Alice's data despite computing on it. This is as awesome as it sounds. Of course, in practice it is also way more costly than computing in the clear. Helping to easily determine how much more costly is one of the goals of the SHEEP project.

In the latest HE schemes, ciphertexts are not strings of fruit but polynomials, but we don't have cute emojis for those... 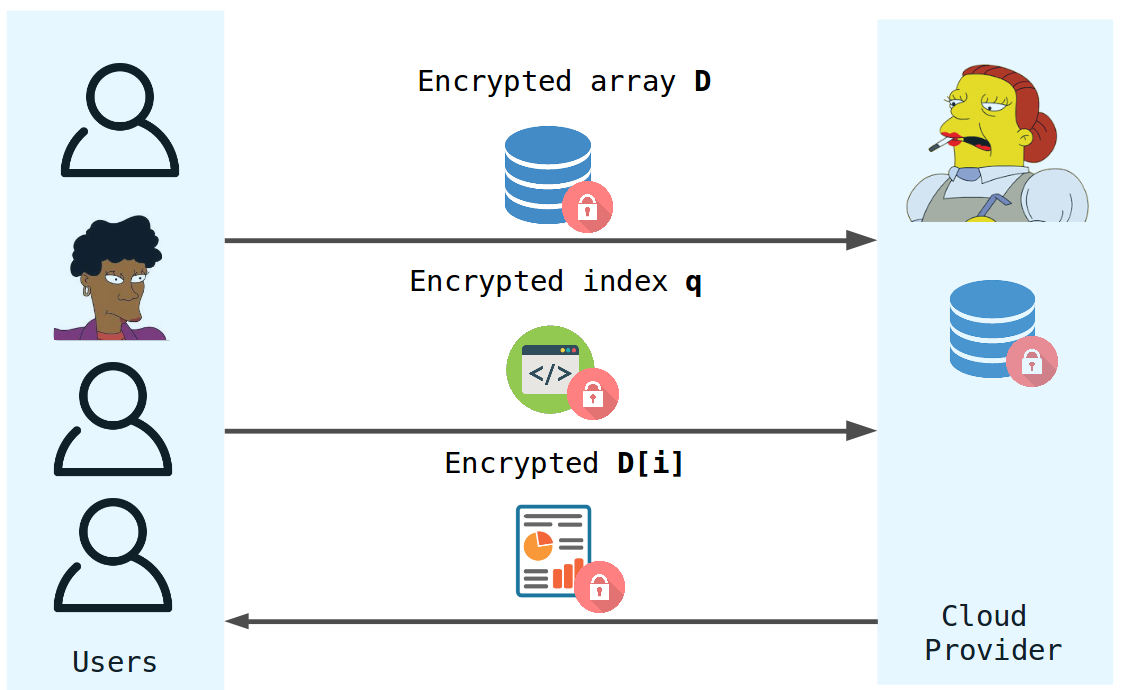 At the Alan Turing Institute we have been experimenting with Homomorphic Encryption for almost a year now and contributing to its more practical engineering aspects. The outcome is SHEEP: a platform for practitioners to evaluate the state-of-the-art of (fully) homomorphic encryption technology in the context of their own concrete application.

Returning to the Private Information Retrieval problem, the version of PIR in SHEEP's native benchmarks works like this: a server holds a dataset $d$ of $n$ integers encrypted under the client's key. For the server to select an element obliviously, the client sends an encrypted selection binary vector $s$ of length $n$ containing $0$s everywhere except for a $1$ in the position $i$ of the element to be selected. The server then computes the dot product of $d$ and $s$ using the homomorphism, with the encrypted result $r = \sum_{j = 0}^n d_j\cdot s_j$ and sends it to the client, who can decrypt it.

Note that this protocol requires an amount of communication linear in the size of the database (since the selection vector must have as many elements as the database has records). To achieve sublinear communication at the cost of additional computation on the server one can use a nice trick, which we will describe a little later.

We can express this simple dot-product protocol for a database of a specific size (here, eight records) in an assembly-like language which can be run by the SHEEP platform:

This results in a single value (r) being returned that holds the selected element from the database.

The meaning of this program should be fairly self-explanatory: after a list of the inputs and outputs of the program are a list of statements of the form a1 a2 ... aN OP b, which defines b to be the result of evaluating the operation OP with a1 a2 ... aN as arguments. Variables are required to be defined before they are used and never redefined (requirements that mean it is in SSA form). One usually wants to generate such code programatically.

The general idea behind the recursive approach to PIR is to have the client encode its query $q$ as selection vectors $s_1, \ldots, s_\alpha$: one-hot encodings of $q_1, \ldots, q_\alpha$. The client sends the $s_i$s encrypted using an encryption scheme $E$ for which only the client knows the private key. Then, the server runs the whole recursive evaluation described in the equation above using the encrypted $s_i$s, and returns the encrypted answer to the query to the client, who can decrypt it. This approach gives sublinear communication, and in fact logarithmic communication in the case where $\lambda_1 = \cdots = \lambda_\alpha = 2$.

Finally, note that this approach imposes some constraints on $E$. In particular, an encryption scheme supporting homomorphic addition and $\alpha$ homomorphic multiplications is required.

How to do it with SHEEP

where as before d is the database and s is the selection vector and the result is returned in r. Note that there are now only six selection elements (the ss) instead of eight in the simpler scheme, although there are more arithmetic operations.

In this article we have given some simple examples of using the SHEEP language to describe privacy-preserving computation. In the next article in this series, we will describe the various components of the SHEEP platform and how they fit together, and how they can be used to evaluate several built-in benchmarks.

This work was supported by the Defence and Security, and the Data Science at Scale research programmes.