In July 2021, the world’s first 3D printed steel bridge was installed over a canal in central Amsterdam. Built layer-by-layer by robotic arms in a nearby warehouse, the achievement was made possible by Dutch 3D printing company MX3D in conjunction with a huge number of industrial and academic collaborators.

In addition to its unique construction, the 12-metre-long bridge is also a living laboratory for data scientists as it’s instrumented with an innovative sensor network, produced by Autodesk, FORCE Technology, Lenovo and HBM. Everyone that walks, runs or cycles over the bridge, which crosses the Oudezijds Achterburgwal canal in Amsterdam’s red-light district, will generate data about the structure’s behaviour.

The Turing’s programme in data-centric engineering, funded by the Lloyd’s Register Foundation, in collaboration with researchers at a number of universities including Imperial College London, University of Cambridge and Newcastle University, has been developing a ‘digital twin’ of the bridge to help analyse the sensor network data, as well as conducting extensive tests on the physical printed material and using statistical methodology to understand more about the material itself.

This work, in conjunction with that of the wider project’s many international partners, is providing scientific insight not just into how this revolutionary new material and construction process behaves, but also into the potential for infrastructure to act as living objects that encourage greater citizen engagement.

MX3D has been working on the 3D printed bridge since June 2015, bringing it to life through collaboration with various partners, including Joris Laarman Lab who designed the bridge, Arup who acted as the project’s lead structural engineers, and Autodesk who provided their knowledge on digital production tools. Gijs van der Velden, CEO of MX3D, says: “Finding partners that understood the potential of the technology and felt the same drive to solve early adoption obstacles was essential.”

The Turing’s data-centric engineering programme became involved when the concept of a ‘digital twin’ was introduced, which will help monitor and analyse the real-time performance of the bridge. “The digital twin concept is highly complex and avant-garde,” van der Velden explains. “It needs to be adaptive to several data sources that are not usually analysed together. Therefore, it only made sense to do it when the Turing proposed to commit itself generously to the project.”

Liam Butler, then at the University of Cambridge’s Centre for Smart Infrastructure and Construction, got involved because of the need for expertise in advanced forms of sensing for the bridge’s sensor network. Craig Buchanan, one of a number of researchers from Imperial College working on the project with the Turing, explains that they got involved due to their “strong interest in exploring new 3D printing techniques” and the experience of the university’s Steel Structures Research Group in material testing and modelling. Chris Oates, a Turing Fellow from Newcastle University, was brought on board to discover more about the material properties of the 3D printed steel through the use of statistical methodology. And more recently, Eric Daub, Principal Research Data Scientist at the Turing, joined the team to help develop the code for the digital twin model.

These four researchers represent a fraction of the wider project’s many contributors, but their insights illustrate the diverse expertise and value being brought to the work.

Liam Butler explains the thinking behind the sensor network: “We want to measure things like strain, temperature, vibration and acceleration of the structure as people and bicycles are traversing the bridge.” Real-time data from these sensors will interface with the digital twin model of the bridge.

“The digital twin also helped influence the design of the sensor network,” Craig Buchanan explains. “The location of sensors has been based upon the anticipated structural response from our computer model.” The bridge’s complex geometry, chosen to demonstrate the capabilities of MX3D’s printing technology, provided challenges in developing and validating an accurate digital twin. Buchanan and his colleagues remedied this by conducting “careful non-destructive tests – of stiffness, strength, ductility – on the partially-built bridge and comparing these real, measured responses to those predicted by the digital twin.” These tests culminated in a successful 20-tonne load test on the completed bridge in September 2019.

The physical testing has been supplemented by statistical approaches to understand the “intrinsically random” properties of 3D printed steel. “It’s an ‘inverse problem’,” Chris Oates explains. “You’re given data about how much the material displaced under a certain force and you have to work backwards to try and determine the elasticity properties that would generate such a displacement.” This approach is helping MX3D to characterise not just 3D printed stainless steel, but also a number of other 3D printed materials.

“One of the main benefits of the Turing has been to bring together and foster collaboration between academic fields and researchers that do not traditionally work together,” Buchanan reveals, “and these collaborations have undoubtedly led to a more successful project.”

The work is not just giving insights to designers, engineers and data scientists: it is enabling civic interests, too. Butler elaborates: “Thousands of people are going to cross this bridge each hour, so the City of Amsterdam is interested in looking at things like foot traffic, CO2 emissions, noise levels, and more.” In a step in this direction, the team has installed video cameras that will record how people are using the bridge. (To preserve the pedestrians’ privacy, the team’s software automatically converts the pedestrians’ images into stick figures before any researchers access the recordings.)

Mark Girolami, Programme Director for Data-Centric Engineering, concludes: “When we couple 3D printing with digital twin technology, we accelerate the infrastructure design process and ensure we design optimal and efficient 3D printed structures. This project has been a world-first in engineering and it’s fantastic to have the Turing and our team of talented scientists helping to make it a reality.”

Now that the bridge is installed in Amsterdam, the focus of the project is moving to the real-time study of the structure. “We’ve got around 100 sensors in total [on the bridge],” says Eric Daub. “We have lots of lab data, but this will be the first real-world test.”

“Where the Turing is going to be so important and really shine is in the long-term contribution when the data from the sensing system is coming through,” says Liam Butler.

The data will reveal how the steel structure behaves, and also the degree to which the bridge is being used.

“Will the bridge become a hub in the city where people hang out?” says Daub. “Will tourists stop by and take selfies? This all fits into the bigger picture of the smart city. If we have data on how citizens are using different areas and structures, the authorities can better plan the surrounding environment. We know that pedestrian areas are a good place to put shops and cafés, for instance, because the businesses will benefit from the extra footfall. Data-collecting structures like this bridge will help planners to get a better idea of how they should be laying out their cities.”

MX3D is keen to continue developing its technology with help from the analysis being provided by the Turing and its collaborators. “We want to make the printing more adaptive and fully autonomous,” CEO Gijs van der Velden explains. “Data research from the current bridge is essential for creating a hotbed for 3D printing solutions.”

Craig Buchanan believes that the project has the potential to revolutionise the way we think about infrastructure in cities: “Can we create infrastructure that act as living objects, that do more for our cities? Can these kinds of objects help regular citizens and our community to better engage with infrastructure?”. These questions represent the dramatic potential value of this multidisciplinary project and the power of combining physical and digital analysis. 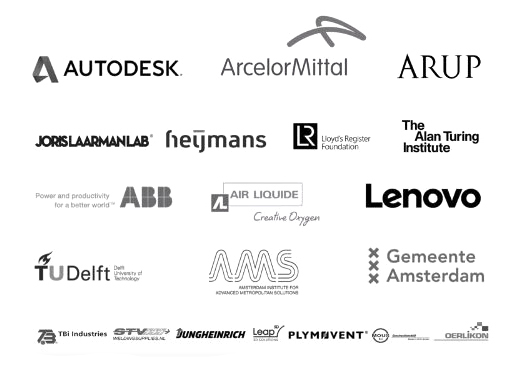 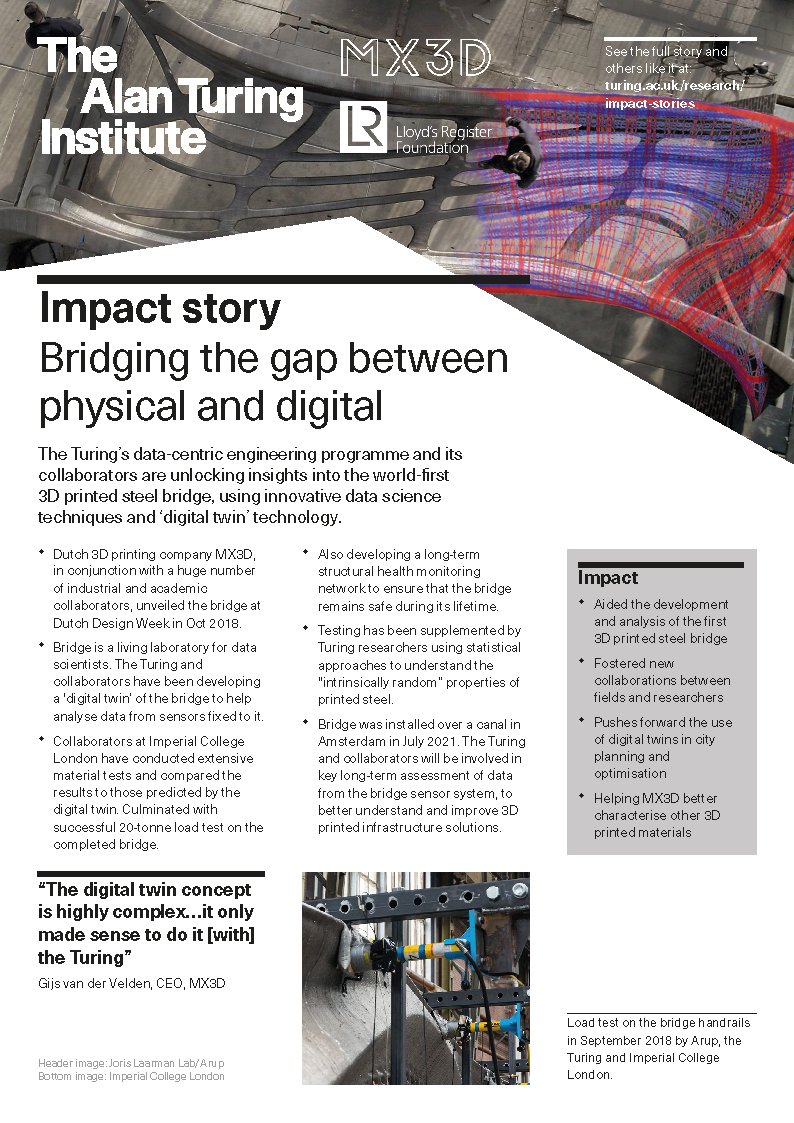