Worldwide, the nature of conflict is transforming. From 2011 to 2016, armed conflict around the world directly resulted in over 100,000 deaths per year, on average. That’s triple the previous five years. And while major wars are in decline, civil conflicts have doubled since the 1960s.

If the peacekeepers of the world, such as the United Nations, had a reliable way of predicting where conflict was likely to break out in any given city or region 12 months in advance, and deploy peacekeeping resources with pre-emptive precision, the savings in human lives and financial resources would be significant.

Data science can play a key role: Turing Group Leader Weisi Guo, an associate professor in the University of Warwick’s School of Engineering, and Sir Alan Wilson, director of special projects at the Turing, are developing just such technology as part of the Institute’s Defence and Security programme. By taking in a range of data on phenomena that affect conflict – from geography and culture, to politics and economics – and utilising the latest thinking in complex networks and spatial-interaction theory, the team has developed a system with remarkable predictive power. In tests on recent historical data, the system is now 82-94% accurate at predicting, 12 months in advance, which peaceful regions will erupt into conflict and which conflicted regions will find peace.

“When Weisi briefs the Defence community, I see stakeholders who have worked in this challenging space for years sit up straight with fascination.”

The project, called Global Urban Analytics for Resilient Defence (GUARD), is supported by the UK Government’s defence and security agencies. Veronica Wardman, Technical Partner for the GUARD project at the Defence Science and Technology Laboratory (Dstl), says: “When Weisi briefs GUARD to the Defence community, I see stakeholders – notably those who have worked in this challenging space for years – sit up straight with fascination and enthusiasm. More welcoming doors are opening right now across a broad range of government sectors than I have ever seen for just one research project.”

In 2015, dismayed at the news emerging from the conflict in Syria, Guo looked at a map of where the Islamic State fighters were operating and realised that it overlapped in places with the old Silk Road – an ancient trade route. “What I slowly started to notice was that a lot of these areas prone to repeated violence were along ancient trade routes,” Guo recalled in an interview with the BBC. “And I thought: is there a reason for this?”

Guo’s primary expertise is in information and networks, and it wasn’t long before he had created a program that connected the routes between the world’s towns and cities and overlaid it with conflict data such as the GTD/UCDP/PRIO Armed Conflict Dataset. It became clear to him that “crossroad” towns and cities are inherently unstable as they are the geographical bottlenecks that travellers and traders have no choice but to use, particularly those on global thoroughfares, such as Kandahar in Afghanistan, Juárez in Mexico, Maiduguri in Nigeria, and Mosul in Iraq.

“The way I describe it to military people is to think about a chess board,” says Guo. “The central four squares of the 64-square grid are critically important. Almost every significant piece will contest them at some point. By creating a human connection network, we found the geographical equivalents of those key squares in various locations around the world.”

Guo joined forces Wilson, and in 2017 they secured funding for a two-year project to automate the identification of future conflict areas and improve understanding of what causes conflict. Working with Turing Research Fellow Gerardo Aquino, Turing Fellow Samuel Johnson of the University of Birmingham and PhD student Guillem Mosquera Doñate of the University of Warwick, they are developing an engine that combines knowledge from different social and political science domains.

Geography, says Guo, is the best single predictor of spatial instability: “Just the shape of where we are, and how those places are connected, already tells us so much. It’s enough in many cases to start giving you a picture of stability in Europe and North America, but violence in other parts of the world, particularly in ancient, antiquities civilisations that acted as important land-based trade routes.”

Guo and Wilson have enriched their core geography model with multiple additional variables, or domains, all of which have a bearing on the likelihood of conflict occurring. “Different populations and cultures have different dynamics, trigger points and strategic influence, which must be appreciated and taken into account,” says Veronica Wardman of Dstl. “The huge appeal of GUARD is that it seeks to unpick and understand this space using the latest cutting-edge tools and techniques.”

On top of the geography aspect comes data on politics (particularly allegiances), culture and economics (particularly military trade). Exploring how these layers influence each other to predict conflict or peace is the essence of the GUARD project. Guo and Wilson have quantified them and integrated them into a single multilayer spatial-interaction equation. “We wanted to consider peace and war as two stable states of the equation: stable in the sense that if you're in this state, it takes a huge amount of energy to move out of it.”

They modelled every single city and town in the world in terms of these bi-stable states, then integrated how other factors contribute to these solutions. “Serious military trade can deter invaders, whilst the absence of political alliances can make a country vulnerable,” says Guo. For example, Saudi Arabia enjoys strong international military and political support and that contributes to its internal stability. Conversely, Turkey’s recent switch of military trade from the US to Russia is also seen as a turning point in the model.

Military trade data is an excellent proxy for trust between two countries, Guo notes. The UN is a good source of such data, as are the UK’s defence agencies. The problem is that such data is often held under embargo for several years before release. In addition, weapons trade data often takes investigation to discover, which is both expensive and time-consuming.

There are multiple research groups attempting to predict conflict, says Guo. “But they are too data focused. We're trying to predict specific futures from sparse amounts of conflict here, conflict there, and you can’t do that from data alone. That’s like trying to predict a hurricane purely from rainfall data. Our approach is: equation first, AI second.” The GUARD model is based on first-principle “socio-physical” equations. In other words, it is a mathematical construct that uses optimally sampled observations of humanity to inform the solutions to its equations and model the behaviour of large groups of people.

Whatever the research angle of attack, the toughest challenge for any group is to predict, with confidence, new conflict in a place that has not been in conflict for many years, and to predict new peace in areas that have been in long-term conflict. GUARD has quickly developed to a startling level of accuracy with recent, historical data. In terms of predicting new conflict in any given city or region 12 months in the future, the GUARD model is currently 94% accurate, says Guo. “We’re very good at finding new transitions to conflicts,” he says. “It's remarkable. I'm not sure I believe it myself.” New peace ‘breaking out’ in a conflict zone is harder to predict, with the model currently at 82%.

"We greatly value Weisi and the broader Turing community’s work in this area."

“Now that GUARD is demonstrating a promising foundation of progress, stakeholder interest is growing across key Government strategic players in this space,” says Wardman.

The work is also being followed with interest by the United Nations, which joined forces with the Turing to host a two-day workshop in July 2019 entitled AI, Peace, and Security. “Because we greatly value Weisi and the broader Turing community’s work in this area, we collaborated with the Institute on convening a range of actors and researchers working in the peace and security space,” said Daanish Masood, Political Affairs Officer at the UN.

Due to the time-lag involved in the availability of data on trade, embargoes, and allegiances, the GUARD system has not yet been able to make predictions for how the world will look in 2021. “This is the question everybody is asking, of course, but we haven't attempted it yet,” says Guo. “We’ve been focused on the research; on inventing a whole new mathematical model, building a global system for it, integrating the data sets, and making predictions on historical data.”

Wilson and Guo also point out that it is not just about prediction, but also about discovering the combination of conditions that exasperate the risk of violence and what the (sometimes unexpected) relationships between these conditions are.

Taking a wider view, in a comment piece published in Nature in October 2018, Guo, Wilson and Kristian Gleditsch, Regius Professor of Political Science at the University of Essex, called for the setting up of an international consortium, “to develop formal methods to model the steps society takes to wage war. Establishing this platform would cost tens of millions of dollars, a fraction of the billions that the world pays to cope with conflict”.

Today, in the face of multiple universities, organisations and states producing disparate research into conflict prediction, Guo wants to see the field become more unified. “We don't need a million early warning systems, we need one, global early warning system –standardised preferably by an international organisation – that everyone can work with. That's very important.” 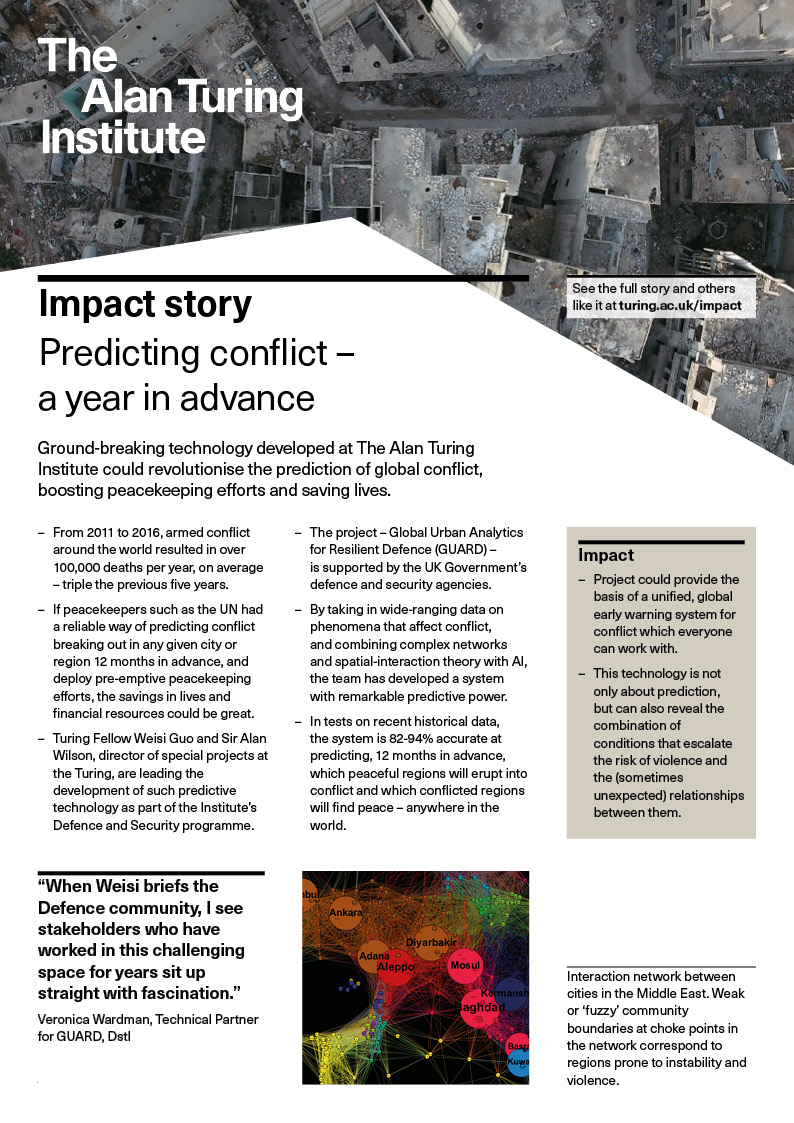