Jet engines are feats of engineering. By sucking in air, igniting it, and blasting it out the other side, they create a force that propels aircraft through the sky.

Their principle is simple: the air pushes out of the back of the engine, creating an equal and opposite force, or ‘thrust’, that powers the engine, and the aircraft, forwards. But in practice, jet engines are complex beasts, made up of thousands of interconnected parts working in an environment that can get as hot as 2,000°C.

To analyse the performance of jet engines, aerospace engineers use computer models to simulate the engine’s components and the intricate, super-heated airflow through them. But the sheer complexity of these models means that they can take days or even weeks to run, slowing down the speed with which engineers can test new designs.

Over the past couple years, researchers at The Alan Turing Institute have been working with Rolls-Royce to develop ways to streamline these models. The goal is to use statistical methods from data science to reduce the time it takes to design new components, meaning that aerospace companies such as Rolls-Royce can design more efficient engines far more rapidly. These improved engines will use less fuel, resulting in a lower carbon footprint. And the principles of this work can also be applied to the engine manufacturing process, providing a potential way to cut waste and costs.

The collaboration between the Turing and Rolls-Royce began in mid-2019. “We wanted to find ways to simplify and accelerate these computer models,” says the Turing’s Pranay Seshadri, one of the project’s two co-leaders. “We saw an opportunity to bring together the expertise of aerospace engineers and researchers who work in machine learning and statistics.”

The project, which also involves research groups at Imperial College London and the University of Cambridge, forms part of two programmes at the Turing: ‘AI for science and government’ (ASG), which aims to use AI and data science to support the UK economy, and ‘data-centric engineering’, which is applying data science techniques to physical engineering problems. Seshadri and the project’s other co-leader Andrew Duncan are both Group Leaders on the data-centric engineering programme. “This project is the perfect fit,” says Duncan. “We’re directly using data-driven methodology to improve jet engines.”

The work also fits neatly into the ASG programme, demonstrating how these computer models, also known as ‘digital twins’, can help to boost UK industry. “Digital twins such as those being pioneered at the Turing are allowing engineers to model ever more complex systems, providing crucial insights into the functioning and design of objects ranging from engines and wind turbines to bridges and oil rigs,” says Allaine Cerwonka, Associate Director of ASG at the Turing.

So far, two key innovations have come out of this collaboration.

Firstly, jet engine design. Let’s say that you want to tweak the design of the engine’s fan in order to increase the engine’s efficiency. The fan is the engine’s frontmost component, which draws in air with its rotating blades. The properties of these blades, such as their shape or their tilt, will determine how efficiently air is sent through the system.

If each blade only had a couple of properties, or ‘design variables’, that affected the fan’s efficiency, it would be fairly simple to use a computer model to predict how the efficiency would change when you alter these variables. You could then draw a ‘contour plot’ as below, visualising the relationship between the two variables and the fan’s efficiency.

But in the models that engineers use to simulate jet engines, the fan blades can have as many as 300 different variables, all of which could affect the fan’s efficiency. So the team has developed algorithms that rapidly home in on the variables that are most important to the problem. The algorithms rely on the fact that most problems with lots of variables have a more basic underlying structure: there will often be just a couple variables (or a couple combinations of variables) that have the most impact on the overall objective (in this case, increasing the fan’s efficiency).

Identifying these important variables – known as the ‘active subspace’ – allows the team to produce two-dimensional contour plots like that above, but for problems with many variables, and far more quickly than conventional data processing methods. These ‘active subspace design maps’ allow engineers to reduce the number of variables in their models, so that the models run quicker, speeding up the development of more efficient engines.

“It makes the search for a new design a lot simpler,” says Duncan. “Instead of looking for a needle in a haystack, you’re looking for a nail in a tin.”

Rolls-Royce is now using these maps in the design of its future jet engines. “We have been using subspace maps to project the entire design space onto a manageable and navigable subspace,” says Shahrokh Shahpar, a senior engineer at Rolls-Royce who is a Fellow in Aerothermal Design Systems.

Waste not, want not

No manufacturing process is perfect: if you zoom in close enough, there will always be variations in the final product. The key question for engineering is how much variation you can allow without compromising the product’s function or safety – what is known as the ‘tolerance’.

The fact that many problems in aerospace engineering depend on just a few key design variables also means that there are many variables that have very little impact on the problem. Running with this idea, the team has been working on algorithms to calculate ‘inactive subspaces’: the variables that have the least impact on the overall objective (essentially the opposite to the ‘active subspaces’ described above). This allows the team to quickly identify the variables that are least crucial to a component’s performance and safety, so that the manufacturing tolerances for those variables can be relaxed.

“This concept has the potential to change the way we design and manage our manufacturing processes.”

Deployed during manufacturing, the team estimates that this technique has the potential to save companies millions of pounds. “The larger the tolerances, the cheaper the manufacturing process,” says Seshadri. One reason is that, if you’re able to increase certain tolerances for a component – a fan blade, let’s say – you’ll have to throw out fewer fan blades for failing to meet the tolerances, so less material is wasted. 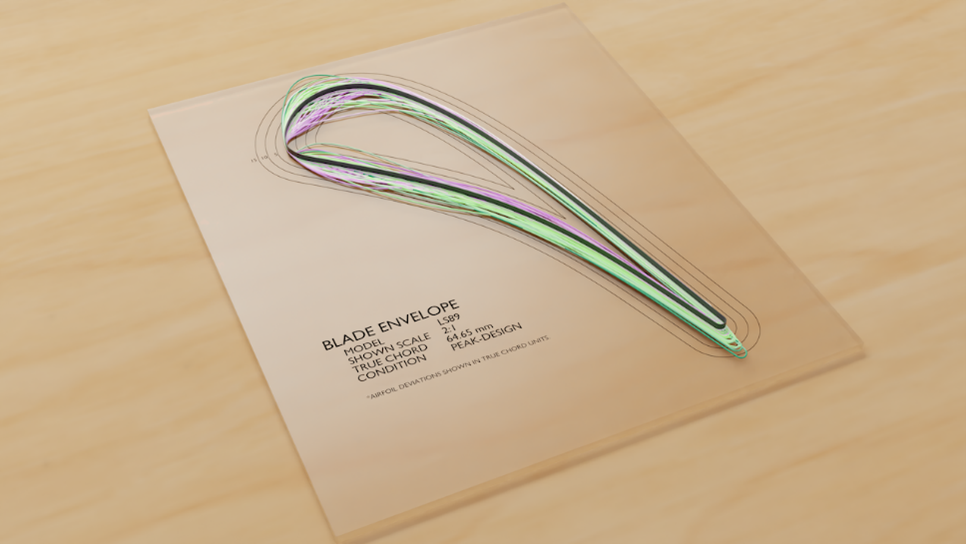 The end product of this work is a tool called Blade Envelopes, which provides a 3D visualisation of the tolerances for individual fan blades (above). It shows the amount the blade’s dimensions can vary by without its performance being affected.

“This concept has the potential to change the way we design and manage our manufacturing processes,” says Shahrokh Shahpar at Rolls-Royce.

So that the wider engineering community can benefit from this work, the team has created an open-source software called equadratures, which allows anyone to access these tools. The team regularly updates the software’s code as algorithms are developed, creating a dynamic resource that’s already getting thousands of downloads a month.

Now that the code is out there, the possibilities are endless. “Researchers could use these tools in any model where they want to reduce the number of variables,” says Seshadri, “from engineering and social science to economics and epidemiology.”

So far, the team has focused its attention on conventional jet engines, but it’s already looking ahead to the next generation of planes.

“Aerospace engineers are becoming increasingly interested in radical concepts such as zero-emission planes,” says Seshadri. These planes of the future could be powered by electricity or hydrogen, and Seshadri says that the tools developed by his team could speed up component design, whether that be a wing section, a rudder, a fuselage, or a next-gen engine.

This is a tantalising glimpse of the future of flight, and data science techniques such as those being developed at the Turing promise to play a key role.