The National Grid Electricity System Operator (ESO) balances the electricity system in real time, ensuring that supply and demand is always met regardless of what electricity is being used or what electricity is being produced. This balancing is becoming more challenging as intermittent generation, such as wind and solar power, becomes a bigger part of the overall energy mix. Renewable generation can often produce more or less than expected, making balancing difficult.

Data-driven methods and models to forecast renewable generation output aid this balancing process. National Grid ESO collaborates with many organisations to continually innovate upon and improve these forecasts. In 2017, researchers and doctoral students at The Alan Turing Institute helped ESO explore ways of developing improved forecasting models for solar and wind power by collaborating on an innovation project, funded by the Network Innovation Allowance (NIA).

The initial solar power forecasting model that was developed by Turing researchers has since been validated, tested and implemented by ESO, alongside a range of other new forecasting approaches. The Turing’s model has contributed to a new solar forecasting system which is 33% more accurate at day-ahead forecasts. These more accurate forecasts aid in more efficient balancing of supply and demand, ultimately lowering costs for consumers.

The Turing regularly organises Data Study Groups (DSGs): week-long events bringing together some of the country’s brightest talent in data science, analytics and mathematics, to analyse real-world data science challenge. ESO participated in the first DSG in December 2016, providing the challenge of investigating how a data-driven approach could help with real-time balancing of the electricity system.

Dr Andrew Duncan, Assistant Professor at Imperial College and Visiting Researcher at the Turing, who led the challenge group from the Turing’s side, describes the work that was produced: “The output was more than any particular solution to any problem [National Grid] had, it was more of a smorgasbord of methods we applied that they weren’t aware of or hadn’t tried.”

A representative from National Control at ESO, who worked closely with the participants throughout the week, summarised “It was a very intense but very rewarding experience. The rate of progress on the problems posed and the commitment from the participants exceeded my expectations.”

It was noted that a number of the methods proposed by the participants had excellent potential for forecasting renewable energy generation. The ESO energy forecasting team, as well as the SO innovation team, were keen to continue collaborating, proposing that participants of the Turing’s summer internship programme could scope an NIA-funded project to develop the concept further.

The Turing’s internship programme, based at the Institute’s HQ at the British Library, allows interns, who are typically PhD students, to contribute to defined research projects, share knowledge, and be part of a data science community of leading researchers.

Three PhD interns from the University of Oxford, University of Sheffield and Newcastle University respectively, were chosen to work with ESO, with expertise across engineering, maths, and statistics. They were tasked with providing new and improved methods for forecasting wind and photovoltaic (solar) generation output in Great Britain.

The interns worked very closely with ESO, with weekly onsite visits to the Electricity National Control Centre, familiarising themselves with the ESO’s computer systems, database and internal workings. Feedback from the interns was extremely positive; as Bernardo Perez Orozco, University of Oxford, says, “Everyone was extremely helpful and collaborative. It was excellent working on a project with clear impact in people’s lives.”

The interns implemented methods and produced code; for wind generation this was using a ‘Gaussian process’ method, and for solar generation a chain of different methods using machine learning and computational statistics were used. Kevin Tilley, Senior Energy Forecaster at ESO, and project manager for the collaboration, notes, “What was really good about [the project] was that it brought ideas into ESO that we hadn’t considered before and might not have considered otherwise.”

The internship group tested the accuracy of its models against the models that ESO had previously been using. For solar generation, the code showed small improvements for next day forecasts of solar generation output, and potential 10% improvement in accuracy for 7-days ahead forecasts.

During 2018, ESO took this new approach and combined it with several other machine learning techniques in a multi-model ensemble forecast. Enhancing the project’s initial output with these different machine learning methods, ESO has built a solar forecasting system which is 33% more accurate at day-ahead forecasts.

The innovation project run with the Turing was the first step towards the delivery of new advanced forecasting capabilities for ESO, which is currently running a strategic project aimed at delivering machine learning and other advanced technologies into its forecasting operations.

This significant improvement in forecast accuracy is helping ESO run the system more economically and more securely. This means lower bills for all electricity consumers.

The working relationship between the Turing and National Grid also has the potential to continue further. As Duncan notes, “The [internship] project opened up a lot of new avenues and [National Grid] are interested in pushing other projects forward. There’s no shortage of problems to tackle.” 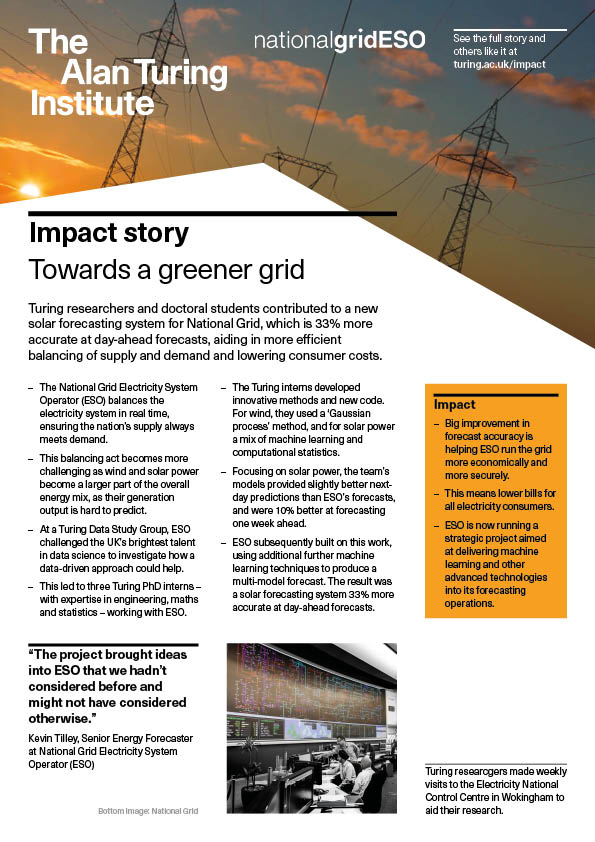