Critical transport infrastructure, such as the Clifton Suspension Bridge and Severn Crossings, are essential to the UK with millions of commuters using them each year, but are susceptible to extreme winds. UK wind prediction is currently done using 'wind early warning systems' (WEWS) from which results are currently directly inferred using either a limited number of weather stations giving poor accuracy or using meteorological forecasts too slow to give any warning time. This project aims to find some middle ground between accuracy and computational expense that provides acceptable results as well as the time to act on them.

This project uses data from the Met Office Integrated Data Assimilation System (MIDAS) at 12 sites around Bristol. Five years of hourly weather measurements including wind speed and direction, temperature and air pressure are used. The MIDAS site at Filton, closest to the Clifton Suspension Bridge, is omitted and used as true data to compare against.

First, predictions were made using solely data from the Filton site to try and forecast wind behaviour only in time, one hour in advance. This prediction was done using a 'recurrent neural network' (RNN) featuring 'long short term memory' (LSTM) cells. RNNs are a type of deep neural network that can be used to observe long term wind behaviour and utilise it in its' prediction as well as further variables including time of day and temperature.

Second, predictions were done spatially to try and predict the behaviour at Filton using the other 11 MIDAS sites assuming no data was held at Filton. This prediction was done using 'radial basis function' (RBF) based spatial interpolation. This allows prediction in space by weighting measurements from the other 11 sites by their proximity to the location of interest.

Finally, the two above techniques where combined to produce spatio-temporal prediction at Filton using the 11 other sites 1 hour in advance. This is a novel combination of the two techniques that provides flexible prediction in time at a site where no information is assumed to be held. 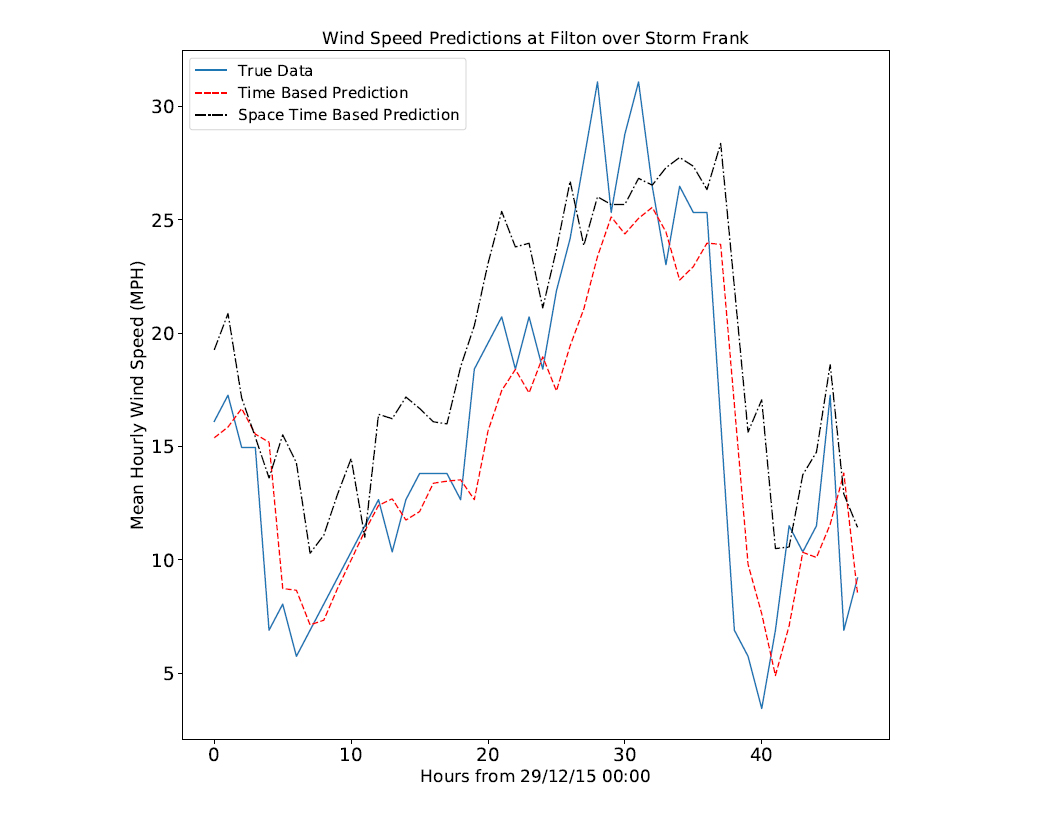 This project aims to provide prediction of wind behaviour at the Clifton Suspension Bridge in Bristol using methods fast enough to provide a dynamic early warning for users of the bridge. It also requires that inference be performed using a sparse network of weather stations that are not necessarily near the infrastructure in question.

Success would be defined by construction of an early warning system that not only warns of imminent danger but also defines when there is not danger. In particular, if there is high wind in the area that would otherwise shut the bridge can it be proven that the closure would be unnecessary such that traffic can continue moving unabated.

This work is worth doing for three primary reasons. First, the safety of the public is paramount, and closing bridges as necessary to reduce risks is an absolute priority. Second, bridges truly are crucial to modern British infrastructure. Even short term closures can be devastating both economically and to the public quality of life, and so unnecessary closures due to wind must be avoided. Finally, it can be hard to quantify the structural health of a bridge in the very long term. Hence, this warning system can shut the bridge under extreme conditions to reduce stress of the bridge long term resulting in less damage and potentially billions of pounds saved in construction and maintenance.

So far this work has only been applied to the Clifton Suspension Bridge and the Bristol microclimate. Ideally, this work will be extended to first further bridges and then to other vulnerable infrastructure such as tall buildings.